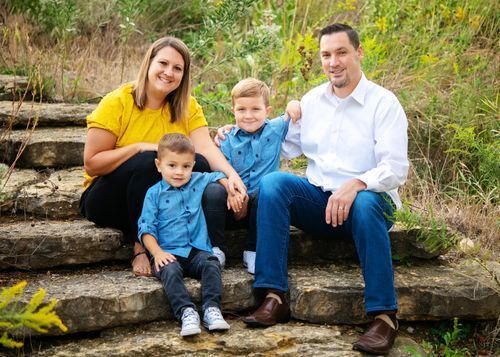 Maddon Herrig, his parents Seth and Megan, and big brother Lawson are our 2021 Tree of Hope Spokesfamily!

This is our Maddon. Our reason. The instigator of so much fun, and the source of so much joy. Maddon gives the best snuggles in the whole wide world, and is our family’s most cherished gift. Maddon is a freshly turned four-year-old that loves to run, jump, play, and climb. Maddon knows all the letters in the alphabet, and hasn’t met a number that he can’t identify. Maddon is a brilliant puzzle solver, and loves to build train tracks, and Lego structures. Maddon looks and acts like most four-year-old boys, but one thing that Maddon struggles to do, is something that comes naturally to almost all of the rest of us. Maddon struggles to simply speak.

When Maddon was around a year old, when many babies begin to say their first words, we started to notice that Maddon wasn’t saying any words at all. He made a lot of sounds, and he always babbled, but words weren’t something that he seemed to be getting the hang of. As time went on, and our worry began to grow, many people told us things like, “Don’t worry about it, he’s a boy,” or “It’s okay, he’s the second child,” and “He has a big brother that has never stopped talking for a second in his life, he just hasn’t had time to get a word in.” While all of these things were true (especially the nonstop talking big brother thing), none of these things were the actual reason that words were not coming easily for our Maddon.

When Maddon was not quite three years old, we were told that Maddon has a speech disorder called Childhood Apraxia of Speech (CAS). Childhood Apraxia of Speech is a lifelong speech disorder that he will not ever “grow out of,” but he can overcome. Having CAS means that Maddon knows exactly what we are saying to him and what he wants to say back to us, but he has a really hard time getting his mouth, lips, tongue, vocal cords, jaw, etc., coordinated enough to make that response. So, for most of his four years of life, Maddon’s thoughts, wants, and needs have been stuck inside his brain, with no way out.

There is hope though. There is so much hope because of a wonderful organization in our community, called DSC. Throughout Maddon’s life, he has received speech therapy, developmental therapy, and also participated in a program called PLAY project. DSC is a place where families like ours have found hope. DSC has wrapped their arms around our family and made us feel like everything is going to be okay. DSC has given our Maddon, and so many other individuals in our community access to a world that they wouldn’t have had otherwise.

DSC has some of the most selfless, dedicated professionals that will go to the ends of the earth for the families in our area. DSC offers therapy, and countless other services to all families that live their lives with someone that has an intellectual or developmental disability. The employees at DSC will help you up off your knees after a life changing diagnosis. They will cry with you, wipe your tears, and then give you all the tools your family needs in order to make sure your world keeps spinning just as it was meant to spin. DSC is an organization that is in the business of changing lives, and our community is a better place because of DSC.

As we tucked Maddon into bed the other night, we told him that we were proud of him, and we loved him, just as we have every other night of his life. This night was different though. His dark brown eyes locked with ours and we could tell he had something he wanted to say. After waiting for a minute or so, Maddon finally said, “Maddon love Mommy too.” We couldn’t believe it. We remember a day when we were sure we would never hear him speak those words. But, DSC gave that gift to us DSC has given our family their time, their unbelievably amazing employees (that quickly became family), and an immeasurable amount of resources. All of this dedication and generosity has allowed us to receive the gift of hearing Maddon’s voice. We are forever grateful to DSC, and cannot wait to see what lies ahead for our Maddon.

Please join our family in donating to DSC’s 2021 Tree of Hope campaign so DSC can continue to offer hope to families just like ours.